The Jesuit-Run Catholic College of Lagos
Support St. Francis
Our History and Vision

2. To attract, inspire and retain an outstanding faculty and administration and to offer ongoing programmes of professional development.

3. To organize formation programmes for staff and ensure that the Ignatian/Jesuit character of the school remains vital

4. To celebrate our Catholic/Jesuit identity through events such as liturgies, sacraments and prayers; as well as promote respect for other faith/religions through education and special events

5. To employ the Ignatian Pedagogical Paradigm (context, experience, reflection, action and evaluation) as a          model for instruction and learning

6. To stimulate each student to appreciate his/her God given talents and to examine and articulate his/her thoughts, beliefs, feelings and goals

7. To encourage participation in extracurricular activities as a means of developing the whole person

8. To prepare a curriculum and activities that call our students to be men and women for others (people of service)

9. To stimulate our students and staff to become more aware of social justice issues and to appreciate how their immediate personal and communal decisions and actions can have far-reaching consequences

St. Francis Catholic Secondary School (SFCSS), Idimu, is a Catholic school run by the North-West African Province of the Society of Jesus. It was founded in 1990 by a Jesuit priest, Fr. Francis Cusimano, S.J. the first set of students arrived in January 1991. The School is located in Idimu, Alimosho Local Government Area of Lagos State. It stands on a six-acre piece of land that was donated to the Catholic Archdiocese of Lagos by the royal family of Idimu, the Olorunfunmi Family. Fr, Francis Cusimano, S.J., was at that time the parish priest of Christ the King Catholic Church, Ilasamaja. Though a Muslim family, the Olorunfunmi family has high regards Catholic education. It desired a Catholic Secondary School that would cater for the educational needs of the Idimu community and its environs.

The construction of a small classroom block on the by Fr. Francis Cusimano, S.J, and the admission of the first set of students on 2nd January, 1991, marked the beginning of the realization of that dream for a quality Catholic education. Today, St. Francis Catholic Secondary School, Idimu, has grown in leaps and bounds as evidenced by our many students and staff with modern classroom blocks. It has become a preference point for quality education in Alimosho Local Government Area and beyond. 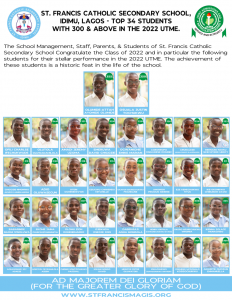